“She would find the boy she always wanted to meet.” Or, The Luckiest Girl 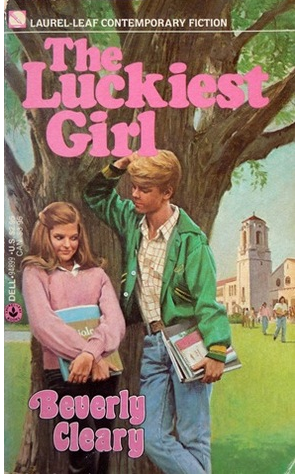 The cover I grew up with. Image courtesy of Goodreads

This book was published in 1958. In many ways, it’s really dated, but in other ways it’s completely timeless. Honestly, I went in to this expecting to roll my eyes at the fifties-ishness of the whole thing. But I actually enjoyed reading it, because it was kind of fun to compare what was relatable and what was totally WTF about it.

Shelley Latham is sixteen years old. She’s an only child growing up in Portland, OR, and her mother is her biggest problem. Shelley’s mom had been a teacher, but obviously quit to become a housewife, but she doesn’t really have anything to focus on outside of Shelley. And she just plain doesn’t understand what it’s like to be sixteen!

The mom keeps in contact with her old college roommate (by mail, natch), Mavis, who is quirky and fun and a mom living in a small citriculture community in California. Mavis suggests Shelley come live with them for a year. It seems ridiculous at first, but Shelley’s dad thinks it would be good for her. After all, they are only going to be able to afford to send Shelley to the local State University where she will attend with a lot of her high school classmates and still live at home. He thinks a year away will be good for her.

Shelley is thrilled to go. She’d been going steady with Jack, who is a nice guy but completely boring, and Shelley didn’t know how to break things off with him. She goes to San Sebastian, CA hoping to meet a boy who isn’t dull as dishwater.

Shelley is adorably enthusiastic about everything in California. The orange grove owned by the family she lives with, their weird old house, the stucco buildings, the constant sunshine, the locals who are all suntanned and healthy looking. On her first day of school, Shelley spots a very good looking guy, and immediately wants him. His name is Philip and he’s in her bio lab class. She also meets Hartley, who is not as handsome but is very nice and is in homeroom and journalism with her.

Shelley fits in well at school, and has a lot of fun with the Michie family. She has a date with Hartley, and has a good time. But eventually Philip asks her out and it’s not long before she and Philip are An Item. Philip is super handsome, and Shelley spends a lot of time thinking about his adorable sunburned nose and blond hair, and that he’s the school basketball star. Unfortunately, he’s very shy and has little in common with Shelley, who is outgoing and gets good grades.

Still, they like each other enough that they distract each other during bio lab and for first semester Shelley ends up with a D, while Philip outright flunks the class, meaning he can’t play basketball this season. Shelley feels guilty about ‘making’ Philip get an F, and she’s sure the entire class will hate her for it. (They don’t.) But still, Philip is grounded for the next semester and isn’t allowed to take Shelley on dates.

Shelley works hard to pull up her bio grade, and meanwhile ends up going out on dates with Hartley, and has a great time. And she’s bummed she spent so much of the school year with Philip when they clearly weren’t made for each other. The book ends with the end of the school year, (A final grade of B in her bio lab) and Shelley going back to Oregon with her parents and knowing Hartley was her first love and that she’ll miss him. Sensible Shelley doesn’t have any grand ideas about trying to go to college with Hartley, just understanding he was her first love and they probably won’t see each other again.

The things that are relatable, despite being from the 1950’s:

Things that are hopelessly old-fashioned:

Despite it all. This was a really fun book to go back and re-read. It’s a charming little book, and it manages to be so charming by having a good balance of being timeless and dated.

Also, Beverly Cleary has four of these books about high school girls finding boyfriends. I don’t think they were intentionally written as a series, but they are currently being sold as a set called First Love. This one is #2, and #4 (Sister of the Bride) was reviewed on this blog by guest reviewer, Alison.  The Luckiest Girl is better than Sister of the Bride.

Wife. Mother. Reader. Blogger.
View all posts by nikkihb →
This entry was posted in Beverly Cleary. Bookmark the permalink.

4 Responses to “She would find the boy she always wanted to meet.” Or, The Luckiest Girl